Think of Athens, and the first thing that comes to mind for most visitors is the Acropolis topped by the Parthenon. The icon is hard to escape as you can see it from almost everywhere in the city, but Athens is actually a collection of colorful, lively neighborhoods to explore. Here are the best to look for on your next trip.

Plaka, below the eastern slopes of the Acropolis Hill, is the heart of old Athens. There’s no escaping the fact that this is a very touristy district, packed with souvenir shops and lots of mediocre tavernas. But it is also a delightful place to walk around, to wander through the narrow lanes and admire the pastel-colored houses. Adrianou Street, which basically separates Plaka from another district, Monastiraki, has the best shops. Take some time to find the neighborhood within a neighborhood, Anafiotika. It was built in the 19th century by settlers from the island of Anafi. They came to Athens for work and created their Cycladic island, complete with boxy, whitewashed houses, lining streets that are really winding staircases, on the slopes of the Acropolis. ​

Where to Eat: Psaras claims to be Plaka’s oldest restaurant. It has a huge menu, of traditional classics and fish, and a picturesque setting on steps leading up to Anafiotika.

Kolonaki is where well-heeled Athenians live, shop and dine. Since Greece’s economic troubles and disagreements with the EU several years ago, a few shops have closed and perhaps a few bistros have disappeared, but all the major global designer names plus exclusive Greek jewelers and designers are present here. Art galleries, shoe shops, and boutiques are scattered across the side streets. Head for Skoufa for Gucci and Louis Vuitton but also koukoutsi, a shop that sells hip, originally designed T-shirts and backpacks for men. Also good for shopping and window shopping: Solonos, Likavittou, Pindarou, Ippokratous and Tsakalof streets. Earn that shopping trip and all the frappés you;ll drink in Kolonaki’s sidewalk cafés with a bracing morning walk up Lycabettus Hill (Kolonaki spreads across its lower slopes).

Where to Eat: This district is full of French, Italian and Japanese restaurants. But one of the best neighborhood locals is Kalamaki Kolonaki, at 32 Ploutarchou. Their souvlaki is legendary.

Syntagma Square is the political and ceremonial heart of modern Athens. It is dominated by the lemon-yellow Greek Parliament building, a royal palace until the mid 19th century. The Evzones, an elite military unit who serve as the Presidential Guard, perform a “changing of the guard” ceremony at the Monument to the Unknown Soldier, in front of the parliament. Their high stepping choreography, coupled with their uniform of white skirts, white leggings, red berets and shoes with pompoms, is one of the main reasons tourists gather in Syntagma Square. Another reason is that it usually the place they first fetch up in the city when they arrive from either the port at Piraeus or the Airport — Syntagma is the central stop on the Metro Lines and the buses serving both. The square is surrounded by banks, hotels and most of the travel agencies in Athens (where you can pick up ferry tickets to the islands). It also has the most popular taxi stand in Athens.

Where to Drink: This is not a great area for dining out, though there are several cafes and bistros facing the square. Instead, stop for a drink and enjoy the view of the Acropolis at the GB Roof Garden Bar in the Hotel Grande Bretagne.

Nearest Metro: Syntagma on the Blue and Red Lines

Monastiraki is yet another central Athens district with a completely different vibe than its neighbors. The heart of it is its market — a flea market that operates every day where you can buy almost anything — clothes, jewelry, pottery, artwork, sweets, baked goods, electronics, antiques. Its narrow lanes are a constant blur of tourists and Athenians.

On the northwest corner of Monastiraki is Psyrri, a trendy residential and entertainment neighborhood that is popular with young Athenians. Until the 1990s, Psyrri had been an area of run down and derelict houses. But as with many cities, artists, musicians, and anti-establishment types were, followed by trendy cafes, bars, and shops. Today, the rough edges have been rubbed smooth and Psyrri is pretty well gentrified. But it is still a youthful quarter with a lively nightlife scene that includes live music venues.

Where to Eat: Go for something completely different at Gostijo, a kosher restaurant that specializes in Sephardic cuisine, the Jewish culture of Spain, the Middle East and the Mediterranean.

Nearest Metro: Monastiraki on the Green or the Blue Lines

Gazi is Athens’s post-millennial design, art, and techno district during the day and its blazing nightlife district well into the night. The area, centered on Technopolis, a multi-purpose arts and entertainment center in a former gasworks, is full of restaurants, bars, and dance clubs. The streets buzz with revelers well into the wee hours. The name ​Kerameikos, is often used interchangeably with the newer name, Gazi, which is actually in the Kerameikos district. Today Kerameikos refers to the Metro station and to an ancient Greek and Roman cemetery used until the 6th century AD and rediscovered in the 19th century. It’s a peaceful place to walk and there’s a small museum. Interestingly, both names come from this neighborhood’s very ancient connection to industry. Kerameikos was originally named for the potters who settled here 3,000 years ago. Gazi is named for its gasworks, abandoned in the 1970s and now a repurposed, vaguely dystopian setting for fun.

Where to Eat: In the midst of the noisy, crowded bistros and the proliferation of franchise restaurants of Gazi, Kanella is a less hyper, yet modern, taverna offering the kinds of traditional Greek specialties that will soak up lots of alcohol. The style is very much home cooking. Or, to totally blow your budget, go for extravagantly modern, 2-Michelin-starred cuisine at the Funky Gourmet.

This is a lovely residential district that begins at the northwest corner of the Ancient Agora and continues along the west side of the agora. It’s popular home territory for Athens’s affluent thirty-something set and its streets are lined with well-maintained apartment blocks and large, pastel-colored villas. One of the best things about Thissio for visitors is the long, wide pedestrian street — Apostolu Pavlou — that borders the agora and then joins Dionysiou Aeropagitou, also pedestrianized, along the south side of the Acropolis. From April to October, there’s a magical open-air cinema beneath the illuminated Parthenon, showing first-run movies, on Apostolu Pavlou. Thissio is one of the greener areas of central Athens with its tree-lined streets and tree-shaded cafes.​

Where to Eat: Meat-eaters who find To Steki Tou Ilia, a very local place on 7 Thessalonikis (+30 21 0342 2407), are well rewarded. It has a reputation for some of the best grilled meat in Athens — steaks, lamb, pork, all barbecued over an open-air charcoal grill.

Exarcheia used to be a magnet for writers, poets, artists, and musicians. But unlike other areas where bohemianism ultimately results in gentrification, Exarcheia has remained a gritty and authentic district. It’s covered in graffiti, ringing with political dissent and popular with students of an anarchist bent. It’s the unconventional center of alternative culture and intellectual argument. It is also the location of what is arguably Greece’s finest museum, the National Archaeological Museum. This is an area to look for restaurants and underground bars with live music, ranging from traditional Greek bazouki music or its urban equivalent, rebetika, to whatever sort of music is trendy at the moment.

Where to Eat: Rozalia is a family friendly taverna with a huge menu on a narrow pedestrian street — Valtetsiou. The locals have softened the gritty urban street with lots of plants and trees in pots. Inside Rozalia looks a bit like a rustic greenhouse.

Nearest Metro: Omonia on the Green and Red Lines or Panepistimio on the Red Line

Athens’s neighborhoods tend to overlap as newer names and fashions attach to older districts and new urban tribes take up the areas. That’s the case of Makrigianni, which was once simply known as Akropoli. It’s the area around the New Acropolis Museum. It stretches roughly from the start of the pedestrian street Dionysiou Areopagitou (at a small square with a statue of Greek revolutionary hero, Makrygiannis) along the pedestrian area and past the Herodian Theater, under the Acropolis. Once you reach the intersection of Apostolou Pavou (also pedestrian) you are in Thissio. Makrygianni is where tourists arrive for the climb up to the Acropolis and where Athenians go for Sunday strolls on the pine shaded slopes and tree-shaded streets. It’s also where you can look at the most fabulous 20th-century goldsmiths’ work at the Ilias Lalaounis Museum.

As you walk southwest through this district, it merges with the relatively quiet residential and university area known as Koukakis. Enter the park known as Philopappou Hill and climb the gentle hill for wonderful views of Athens.

Where to Eat: Mani Mani on Falirou Street specializes in the cuisine of the Mani region of the Peloponnese.

Not every district in Athens is one you’ll want to visit and how you feel about Omonia really depends upon how urban you are. Omonia is modern Athens oldest public square and was once a showpiece of the city. But it has not been a showpiece for decades. It is a traffic-clogged, crowded, confusing and seedy place. If that really bothers you, skip Omonia. But some of Athens’s cheapest hotels are in this area and so, before you book one, it’s a good idea to know what you are getting into.

With that said, i t’s not an absolute horror show. If you’ve been an innocent out-of-towner in New York or Chicago, you can manage Omonia. And Athens’s Central Market is fun to see. Just be sensible.

Where to Eat: Lots of fast-food and not much else around here.

Nearest Metro: Omonia on the Red or Green Lines

Kifissia is Athens’s most affluent northern suburb and parts of it may remind you of Palm Beach or Sarasota. It’s popular with families — who rent high-end villas like those offered by Villa Politia — and couples looking for quiet, romantic getaways. The center is noted for luxury fashion shopping and romantic, open-air restaurants. And given that it’s a little way out of the center, its best hotels — like the 5-star, high concept Semiramis — are relatively reasonably priced.

While you are there, visit the quirky little Goulandris Natural History Museum or head for the commercial center around Panagitsas Street for shopping and art galleries.

Where to Eat: Elias Gi one of Athens most romantic places. It’s in an old stone mansion in the Politia area of Kifissia, with incredible views across Athens from a terrace shaded by giant trees. 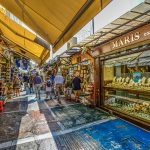 The most scenic neighborhoods in Athens – Downtown Athens
April 26, 2021Greekspiti